Historical background of land of Canaan

Before discussing the land of Israel as a Jewish heritage, we certainly need to be meticulously acquainted with the detailed history of the land of Canaan and the people living there throughout different intervals of time. For example, we shall review the times before the arrival of Abraham in the land of Canaan and during and after the Exodus from Egypt of Prophet Moses with the descendants of Isaac and Israel (Jacob). We will examine whether Palestinians have ties with ancient Canaanites or were Canaanites. Canaanites were the lawful inhabitants of the land of Canaan before Abraham arrived there. How was Canaan divided into the Kingdoms of Israel and Judah and later renamed the Land of Palestine? To know all of these facts, we must explore its detailed history.

Geography and History of Canaan 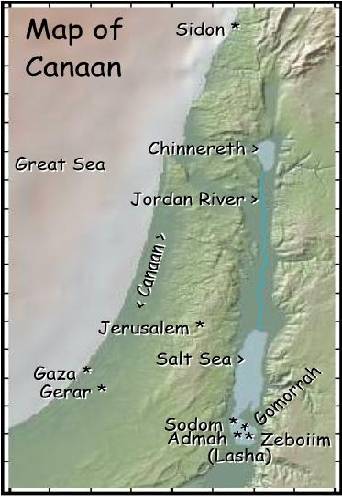 Please donate to
Israel The Legitimate State
Thank youFirst, let us briefly describe the land of Canaan. Canaan (Hebrew: כְּנָעַן Kənáan; Arabic: كنعان Kanān) is the prehistoric name for an area surrounding contemporary Israel, Lebanon, the current “Palestinian Territories,” neighboring coastal lands, and parts of Jordan, Syria, and northeastern Egypt. In the Hebrew Bible, the “Land of Canaan” extends from Lebanon southward across Gaza to the “Brook of Egypt” and eastward to the Jordan River Valley, thus including modern-day Israel and the current “Palestinian Territories.” In a primeval era, the southern area included various ethnic groups. The Amarna Letters found in Ancient Egypt mention Canaan in connection with Gaza and other cities along the Phoenician coast and into Upper Galilee. Many earlier Egyptian sources also make mention of numerous military campaigns conducted in Ka-na-na, just inside Asia.

Canaan predates the ancient Israelite territories as mentioned in the Bible and describes a land with different but overlapping bounds. The classical Jewish view, as explained by Schweid, is that “Canaan” is the geographical name, but this is not a view universally subscribed to. Its renaming as “Israel” after its occupation by the Israelites derives only from the Bible and marks the origin of the concept of a Holy Land. The southern highlands region of Judaea existed by that name from the 6th century BC until the Romans renamed it “Palestina” following the Bar Kokhba revolt against Rome in the 2nd century AD. In the Bible and elsewhere, Zion originally meant the region of and around Jerusalem. However, because the Hebrew prophets used it as a synecdoche to designate the whole of the Israelite land, modern Zionism also uses it in that connotative sense, as for example in the concept of Zionism.