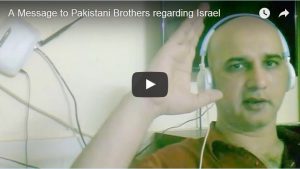 The following is a video speech that I gave to my Pakistani Muslim brothers, and a transcript of it translated from Urdu into English.